This post discusses the differences between optical images and SEM images.

This is an optical image of a flea.

This is a 20 kV secondary electron (SE) image of the same flea.

The optical image has good color contrast, which is often complimentary to SEM imaging.  The SEM image has no color (gray scale), but shows far more surface detail and depth of focus compared with the optical image.

This is a 20 kV backscattered electron (BSE) image of the flea.

The backscattered electron signal is proportional to the average atomic number of the material being imaged, so in this case the carbon tape background and the flea (mostly carbon) are of similar contrast. 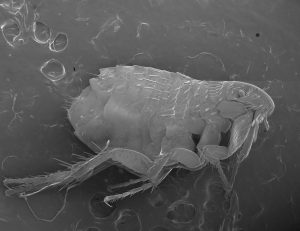 At lower accelerating voltage more of the fines surface details are apparent, but there is less signal and lower contrast.

The advantage of SEM imaging is the high magnification with resolution, which allows for examination of small (often sub-micron) features that would not be possible using optical wavelengths.