These are some representative examples of corrosion failure of electronic components and assemblies characterized in this laboratory. 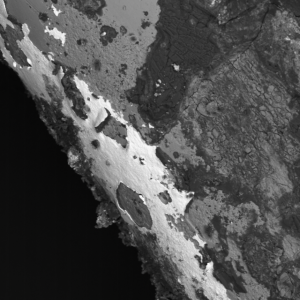 Example 1: This is a BSE SEM image of a contact tine from a telecommunications jack. The tine is gold-plated over a nickel-underplate over copper alloy. The primary corrosion product was copper oxide that indicated corrosion of the tine base metal. Corrosive agents were found on the surface including sodium and potassium hydroxides, which in the presence of moisture can result in galvanic attack of the base metal through minute defects (pores and seams) in the plating resulting in the type of damage observed here. 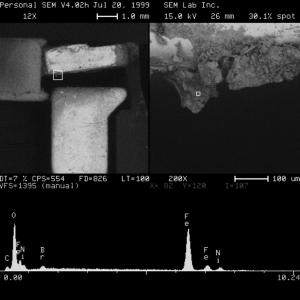 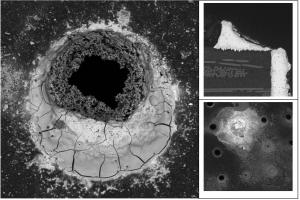 Example 3: This is an example of severely corroded PTH-vias as viewed from the PWB surface and in cross-section. The corrosion appears to have been caused by residual chloride from a highly activated soldering flux. The un-filled vias easily trap process chemicals including solder flux. Another example of a corroded PTH-via is shown here. 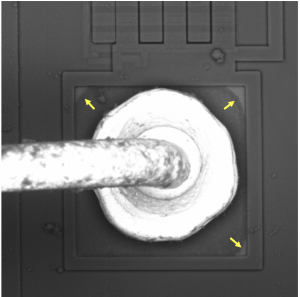 Example 4: This is an aluminum bond pad on a failed plastic-molded op amp that was chemically decapsulated. The aluminum bond pad had been nearly completely etched away due to internal corrosion, which resulted in failures due to increased electrical resistance. Some aluminum remained in the corners of the pad (arrows). CSAM imaging showed internal separation of the molding compound from the die surface and lead frame. In addition, fractures were found in the plastic molding compound suggesting that the parts were damaged by “popcorning” during solder reflow.

Corrosion related electronics failures are common in this laboratory’s experience.